← more from
Infrequent Seams
Get fresh music recommendations delivered to your inbox every Friday.
We've updated our Terms of Use. You can review the changes here. 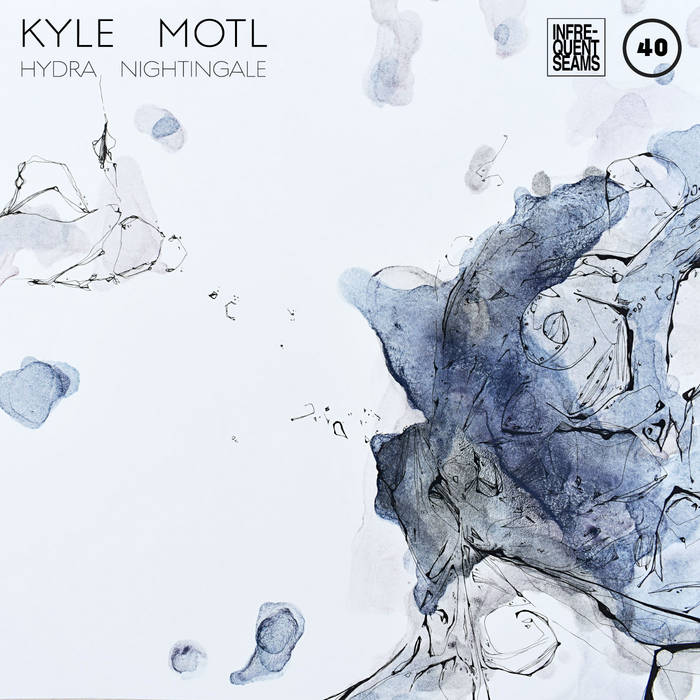 Hydra Nightingale features premiere recordings of recent works for solo contrabass by Caroline Louise Miller, Jessie Cox, Anqi Liu, and Asher Tobin Chodos, performed with vivid clarity by Kyle Motl. Miller’s Hydra Nightingale weaves melodic threads, rattly string noise, and multiphonic noise as a living organism. Liu’s Light Beams Through Dusts, Through a Mist of Moistures views the bass through a post-spectral lens where hazy clouds of barely audible harmonics give way to grinding multiphonic textures. Cox’s Nachklang employs multiphonics and pressure techniques on prepared strings, bringing the bass to speak with a fragile whisper that resonates with glistening tones. Motl’s own Phosphene conjures a hallucinatory polyphony of light by way of oscillating harmonics. The only work with electronic media, Chodos’ Trickle Town brings loopy rhythms in dialogue with Ronald Reagan speeches. Together, these works present a multitudinous yet cohesive view into the possibilities of solo bass.

We speak of sound in terms of high and low, and in doing so we carry some of that metaphor’s cruelty into discussions of music. As the bass has emerged as a solo instrument, some of that cruelty has lost its purchase. But some survives, and by surviving gives this album a delightful plaything.

Hear a low tone. Take a pause. Now hear a chord three octaves up. Is there not some primordial instinct to measure each of the sounding tones against the remembered bass note? The dialogue between the two registers is not innocent of such vestigial hierarchies. Or, at least, from such habituated ways of listening. These habits are exactly what this album toys with, inverting them and working them into beautiful new shapes.

How long, this album asks, and through what disorienting spectral straits, will you continue to cling to a fundamental before you relinquish it as the foundation for everything else? What is the muddiness threshold beyond which a musical figuration is no longer acceptable as a motif? Why is there such a thing as basso buffo, and is the bass even a low instrument to begin with? The works on this album do not castigate these ancient music-theoretical conceits, but instead stand as benign witnesses to their partial decomposition. This music in part eases their passage, but it also seems to tease them on their deathbeds and play with their cadavers.

Each of these pieces, in other words, works by defamiliarizing the lower half of the audible spectrum. If the history of bass notes is a landscape of distantly perceived but rhetorically decisive stratification, these pieces are a quiet and ambiguous form of subterfuge. Instead of proclaiming loudly that the emperor’s clothes don’t exist, they steal them from his bedroom, put them on backwards, and dance in the center of town.

Mixing & mastering by Matt Baltrucki (except for Trickle Town, mixed by Alexandria Smith)

Kyle Motl is a bassist, composer, and improviser described as “spectacularly adventurous and dynamic” whose playing is noted for both its “iridescent delicacy as well as abrasive force” (The Wire). His music "promise[s] to change us by revealing things we could never have imagined” (Free Jazz Collective).

Bandcamp Daily  your guide to the world of Bandcamp

The Hammer and The Relentless from the Boston band Malleus stop by for a chat.